Cost of living in Singapore for Bachelor not sharing Apartment - 2009

So here I am with another post for my bachelor friends who do not want to share apartment. Which is a preference of many I know. Well it is a personal choice and it does works out well for the convenience and privacy one prefers for herself or himself.

In Singapore as you know that Rental expenses make most % of the your salary. So when you are not sharing apartment, all the things like utility, internet, grocery etc is also not shared. Another observation I made in these years is that one who do not share apartment as bachelor with others, generally stay on Condo’s !. So there you go …..

As you can see not sharing apartment does increases your rent as a major expense. You should notice that again these are some of the basic expenses you need to incur for living. You can try and squeeze the budget for sometime, but understand that once you have spent sometime in a country your expenses will gradually go up.

The biggest assumption in all my calculations here is that no annual expenses or large medical expenses are budgeted. They are important and you must add those to the monthly cost of living figure. For a bachelor if you are flying to any Indian destination from Singapore, you would need to pay around $400-$1000 as air fare for single trip for economy class. You must add these expenses in your calculations in case you want to build a plan for yearly savings calculations!

Taxi is another expense which you need to manage. As you start living in Singapore, you will get used to taxi. That’s when you need to budget more for Taxi expenses. Most of the time depending upon your lifestyle and where you stay in Singapore taxi use can be avoided. Singapore offers good public transport.

Lot of people ask questions regarding 1 Bed Room Apartments in Singapore. Unfortunately there are not many 1 bed room HDB flats and I have not see any 1 BHK Condo’s. So your best bet is 2 Bed Room Condo. The Rent given is just an estimate, it does changes depending on economic conditions and area.

As usual, if you have any questions do email me and I will be glad to answer if I can!

Cost of Living In Singapore for Bachelor Sharing Apartment

Posted by Sandeep at 8:14 PM 5 comments: Links to this post

Cost of living in Singapore for Bachelor Sharing Apartment - 2009

So finally I am writing the post which many readers of mine were asking for!. I thought its a good idea to update the Year 2009 estimates for cost of living in Singapore for Bachelor’s. Again as previously explained, this is my own estimation and should be taken as guideline only. Cost of living does differ for everybody based on their lifestyle. So please do care while taking any decision based on this figure.

As you can see above, the estimated cost of living for a bachelor who is sharing apartment with 3 people works out very well. As the rent is the major part of the living, sharing makes you save a lot!.

As these expenses are on moderate side. For example if you add Alcohol in your list the total will be something else!.

This would give a good idea for a bachelor about expenses in Singapore. Sharing the expenses and apartment is not for everybody, I know many people who do not like to share the apartment or cook at home. So in that you need to read my next post!.

Cost of Living in Singapore for Bachelor not Sharing Apartment

Posted by Sandeep at 7:46 PM No comments: Links to this post

Well I was in Pune just before it was declared Flu Capitol of India by our reporters. I remember Prem Chopra’s dialogue from movie “Badnaam Honge To Kya Naam Na Hoga!” :). Coming from Singapore which acts too fast for any Communicable Diseases. Which is very much required Singapore as the population here is very dense and wide spread can be tough on people as well as economy.

I was in Pune in Last week of August-09 and what I saw that many hospitals are just unaware of the fact that someday the H1N1 or Swine Flu will visit their city too. In 2 of the major hospital’s I visited in Pune, right from receptionist at OPD to Consulting Dr. no one was wearing mask!. Well now you already know how mask is the possible key for avoiding the spreading the flu.

Now you will see everybody is looking for a mask in the city.

I know people will always give this excuse about too many people and stuff like that!. Reality is that there was no plan in place, people in India would have just copied what other countries did when the outbreak started few months before it came to India. People somewhere on Internet were also seen quoting that due to hot weather in India the virus will not sustain!. I believe everybody know that India has all kinds of weather!

I came across this post from Amit Paranjape, to which I agree ..specially the point about the people wearing masks but not wearing helmets ! ..

When I was travelling from Singapore to Mumbai, I had mixed opinions about how the situation about H1N1 will be handled at the airport. The scene was like this. Reaching Mumbai Airport at midnight, after a long walk from the Plane to the Immigration Checkpoint there were bunch of people sitting to scan the group of 20+ people using a small digital camera. I doubt whether it was serving its purpose. There was 1-2 staff carrying a H1N1 declaration form, distributing to people. Many of the people were unaware about what to do with that form and what is the next from here. When I looked saw around 3-4 desks organized to collect those H1N1 Forms. Well by the time people understand what to do and how to proceed, in that small area there were just to many people in close proximity and talk to each other and exchanging pens to write on the forms!. So there you are mingling with someone probably having H1N1 already! . Also for some reason during my flight the airline did not provide me the Immigration Form which usually they provide. So after filling that Form which had those usual questions I passed on to the desk and went towards the Immigration clearance.

With new airport terminal at Mumbai I was expected better management of space for these special occasions.

The important point to note in above is that only 1-2 staff from the airport I could see wearing masks!

After the immigration clearance when I went to Pre-Paid taxi counter, the person behind the counter was telling me to hurry and run after paying the money to him. The reason was that they were expecting all taxies to go on strike that night!!

I would suggest following precautions during air travel :

I hope people develop more awareness after these situations.

Posted by Sandeep at 12:16 PM No comments: Links to this post

Cost of renting a Car in Singapore!

Well after long time I plan to write something!. This time about cost of car rental in Singapore. Renting a car in Singapore is expensive affair given the fact that there are costs involved other than just the rental for the car!. Which offcourse applicable to other countries also. But here in Singapore it is more during peak times in a day when the ERP is higher.

Most of you would be interested in knowing about the car rental rates. Recently I visited a car rental shop and got its rate card. Now its the time to share it with others ! 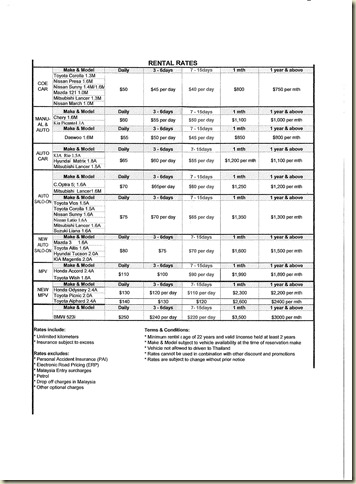 Update : Some problem in updating the image of the rate card. Will do so when blogger allows me to!

Please email me for any Questions @